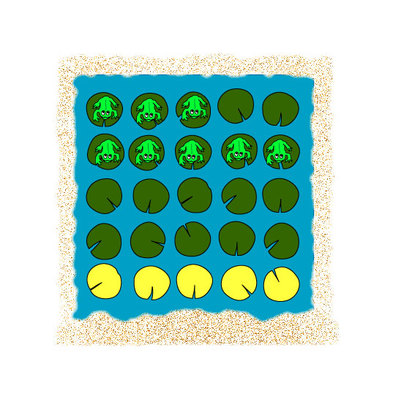 Eight frogs sit on lily pads in a square pond.

A nasty wizard has cast a spell of timidity over the frogs. The spell works like this: as soon as something jumps over a frog, it will dive into the water and stay at the bottom of the pond until the spell is broken.

To break the spell, one of the frogs must hop onto one of the yellow magic lily pads. As soon as one frog lands on a magic lily pad, all frogs are freed from the spell. It's your task to figure out how the frogs can do this when they start from the positions shown in the picture.

However, there's a complication: frogs are only allowed to jump over another frog next to it and land on the next lily pad, and the frogs can only jump horizontally and vertically, not diagonally. A frog cannot jump over an empty lily pad, and two frogs cannot share the same lily pad.